Claude Pouget, a Monegasque citizen residing in Monaco, was distinguished in the sports field by H.S.H. Prince ALBERT II and the Mayor of Monaco.

He is a Legal Advisor, holder of a Masters Degree in Law and member of the Chamber of Legal Advisors of Monaco (www.claude-pouget.com).

He is also a co-founder, along with his wife, of a well-being-coaching society:

Managing director and co-founder of the prestigious Fighting Masters and Trophy, (www.mcfm.net), Claude POUGET has been distinguished as a global promoter for several years.

Promoted by H.S.H. Prince Albert II to honorary commander of the Monaco National Police in 2013, and awarded the Golden-gilt Medal of Honour in 2010, following a career as a Police Officer for over thirty years, Claude POUGET was head of the Elite Group (equivalent to RAID) and instructor at the police academy. He ended his career in the Police as Advisor to the Commissioner of the Monaco Police (www.claude-pouget.com).

In martial Arts, Claude POUGET has been distinguished at the Hall of Fame as Master in Martial Arts (2015) and Self-Defence (2017) (www.monaco-arts-martiaux.com).

In Krav Maga, Claude Pouget was trained abroad, notably in Israel, and is an international and national executive in France and Monaco.

H.S.H. Prince ALBERT II awarded Claude POUGET the Silver Medal of Physical Education and Sports of Monaco for his work within the International Martial Arts Academy of Monaco, approved by the Prince’s Government, which he co-founded twenty years ago (1997) and is affiliated to the aforementioned Monegasque Federations of which he is one of the directors. 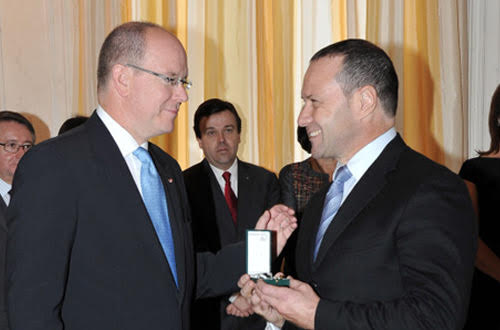 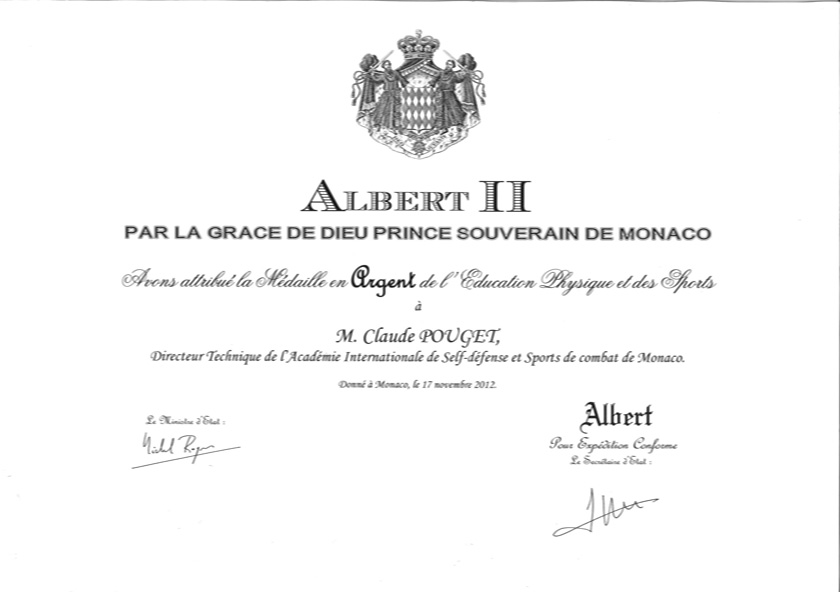 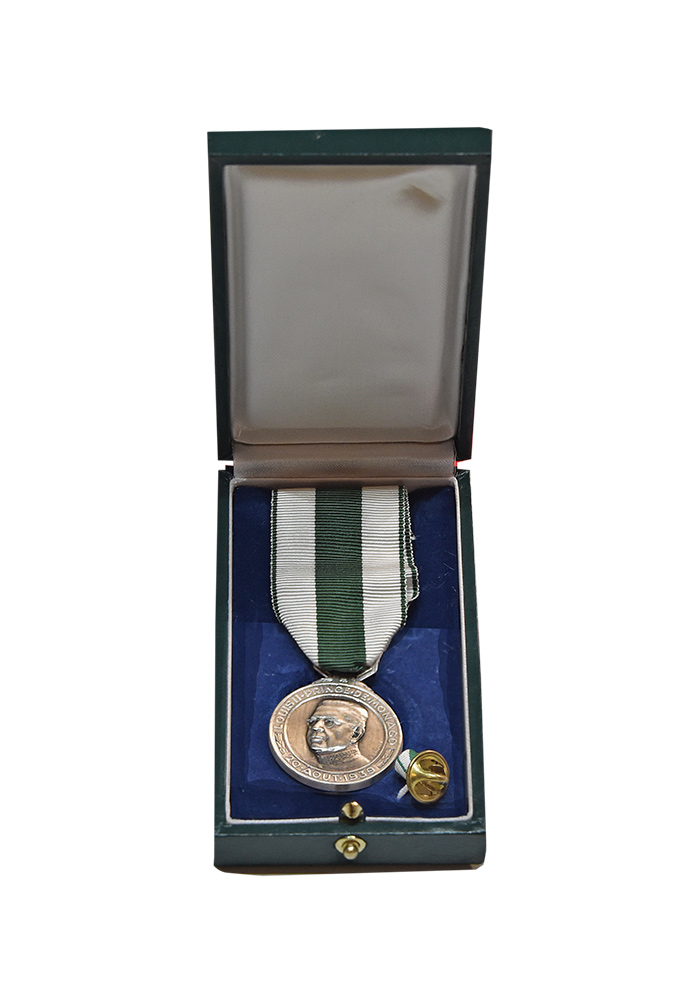 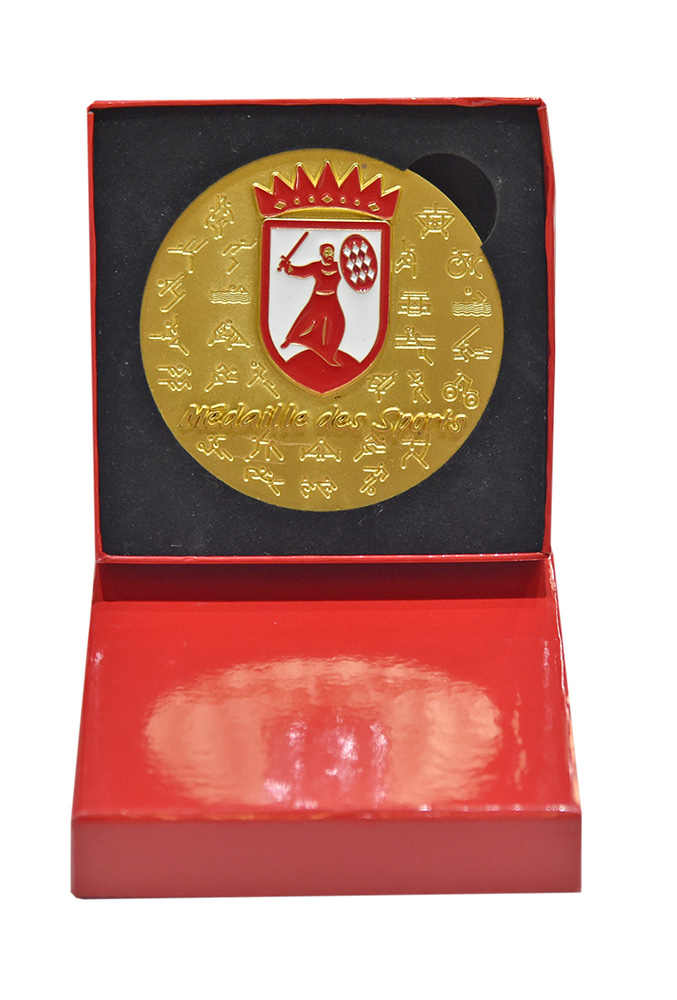 The Mayor of Monaco, Mr. Georges Marsan, awarded Claude POUGET and his teammate the gold sports medal on the occasion of their title of world champion in Krav-Maga (Technical) - 2019

Claude Pouget is currently a legal advisor (holder of a Master 2 in Law), and member of the Chamber of Legal Advisors of Monaco.

Together with his wife he is a co-founding director of a Private Centre for Well-being and Exclusive Coaching at the Port Palace Hotel (www.beautyangels.mc). It offers private coaching courses in Krav Maga Self-Defence, Kickboxing and other martial arts or Fitness for the general public, aged 3 upwards (https://www.beautyangels.mc/en/fitness-coaching.html). 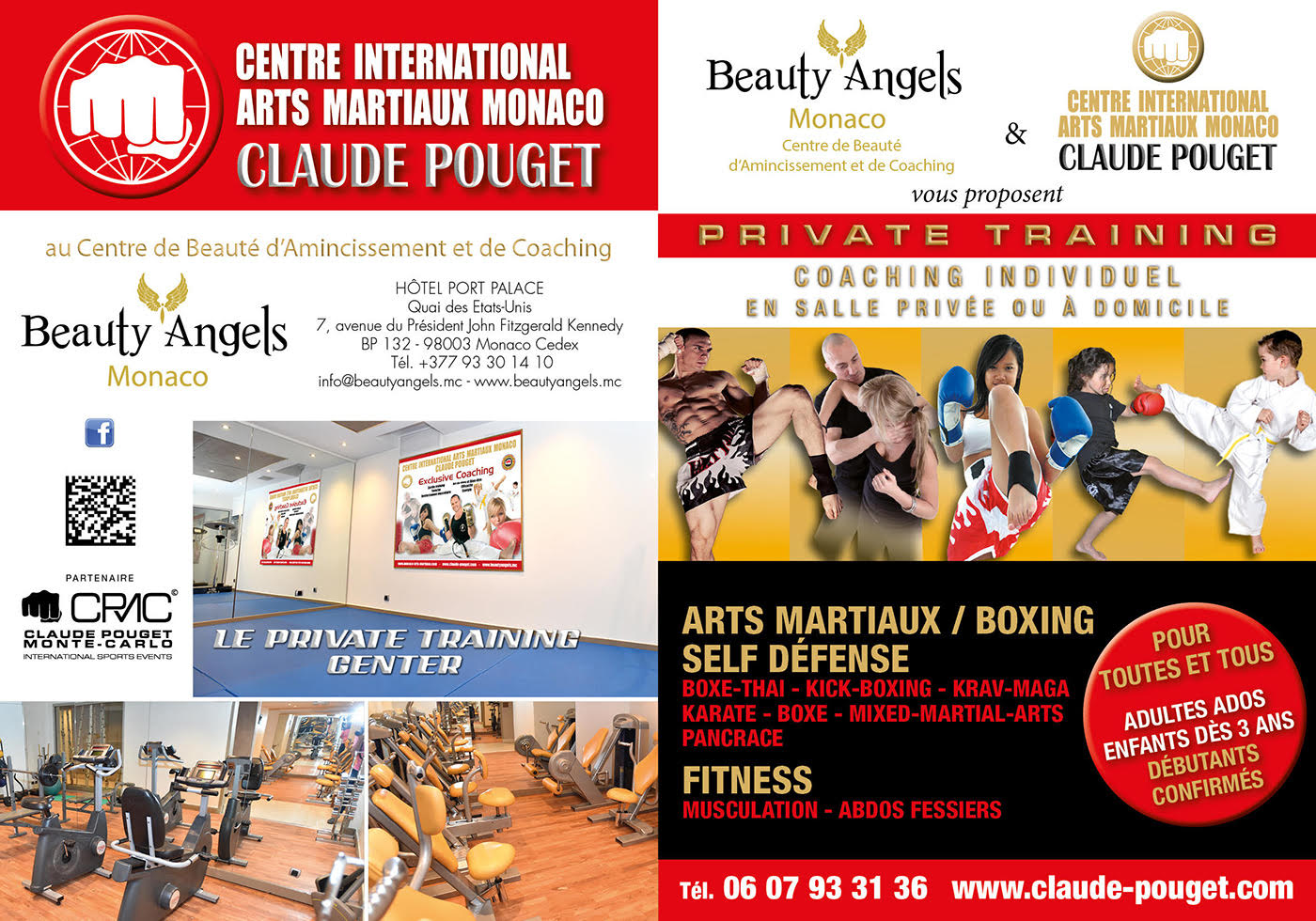 Co-founder and Managing Director of the “Monte-Carlo Fighting Masters and Trophy”, distinguished as global promoter of the year!

Co-founder and Managing Director of the “Monte-Carlo Fighting Masters and Trophy”, having organised 30 fighting sports world championships including 7 in Muay Thai and 23 in Kickboxing, which were internationally broadcast, Claude Pouget was awarded the title of global Kickboxing promoter in 2013, 2016, 2017, and 2018!

H.S.H Prince ALBERT II awarded Claude POUGET the title of honorary Police Commander (2013) and the Silver-gilt Medal of Honour (2010) at the end of his more than thirty year long career as an Officer in the Monaco State Police, in the Department of Public Security since 1984, then aged 23, he was successively a Lieutenant, Captain and Commander. Claude Pouget is also still a member of the International Police Association.

During his career, his duties in the Police were among others:  head of the Elite Group (equivalent to the French RAID), he was attached to Protection of Public Figures, head of economic intelligence (economic counter-espionage) and headed the investigation and intervention unit of the judicial police, as well as being a legal and Self-Defence instructor at Monaco's Police Academy. He ended his police career as Advisor to the Commissioner of the Monaco Police. 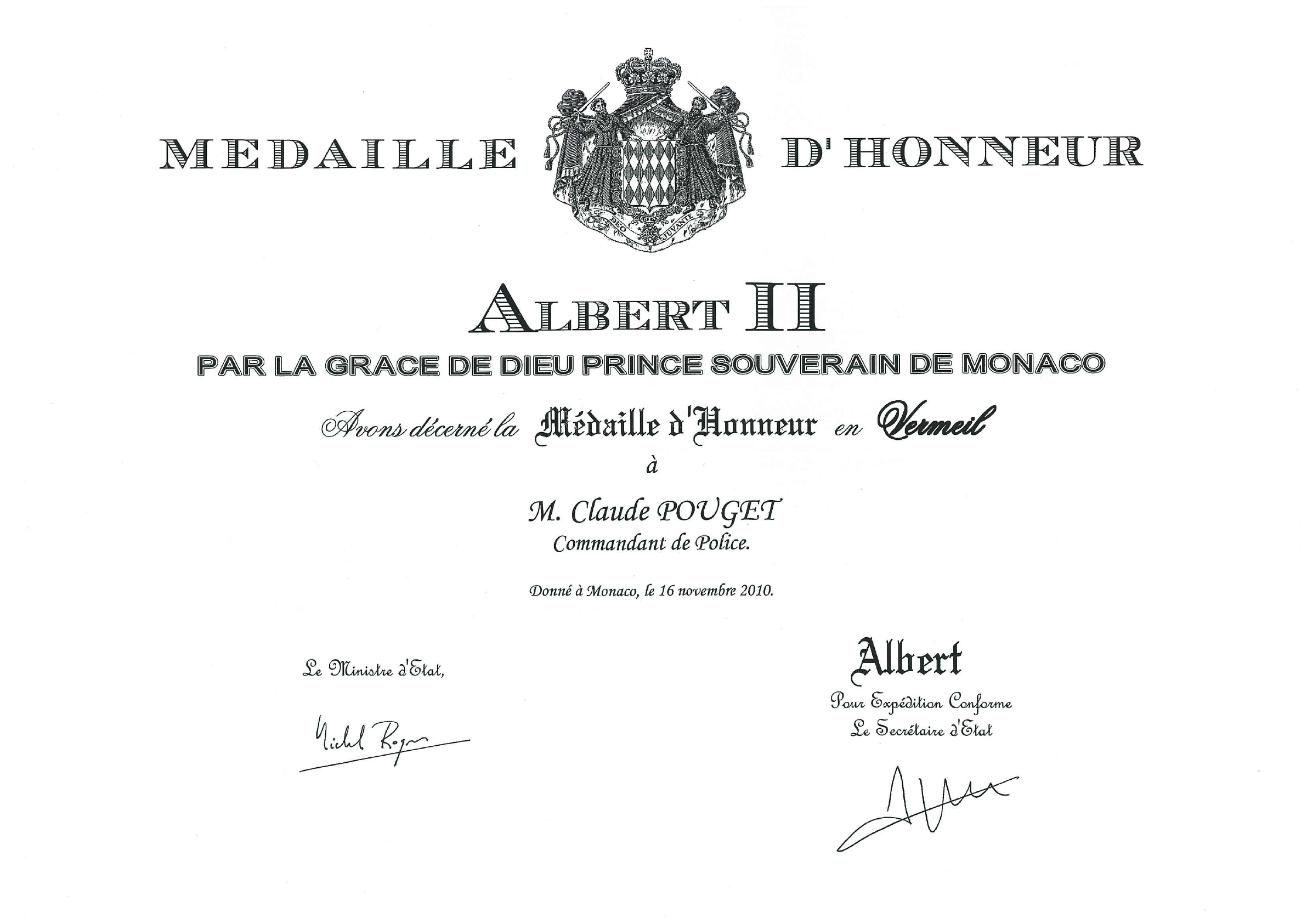 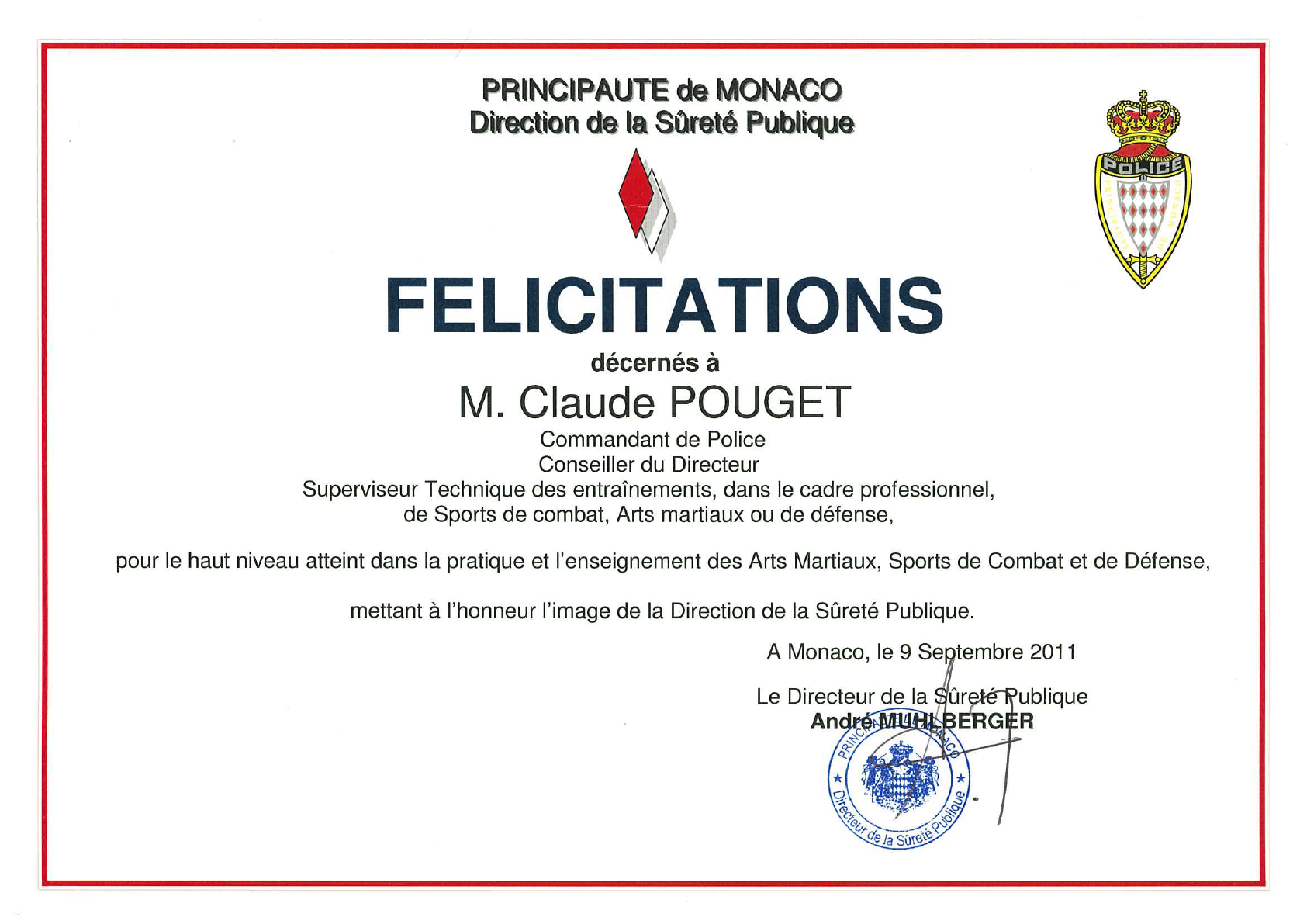 Claude Pouget has been honoured several times: since 2010 at the "Hall of Fame" in Valencia, Spain, subsequently obtaining the titles of "Grand Master" in Martial Arts (2015) and Self-Defence (2017)!

The 58-year-old Monegasque expert, multi-skilled in the field of martial arts, has practiced Martial Arts and Self-Defence for almost fifty years (1971), including twenty years in Krav Maga (1999), which is one of his specialties, in the Principality but also internationally. 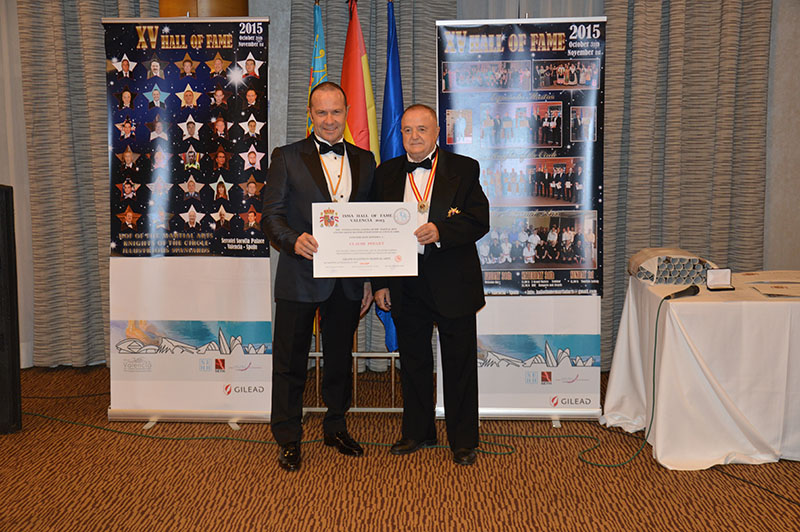 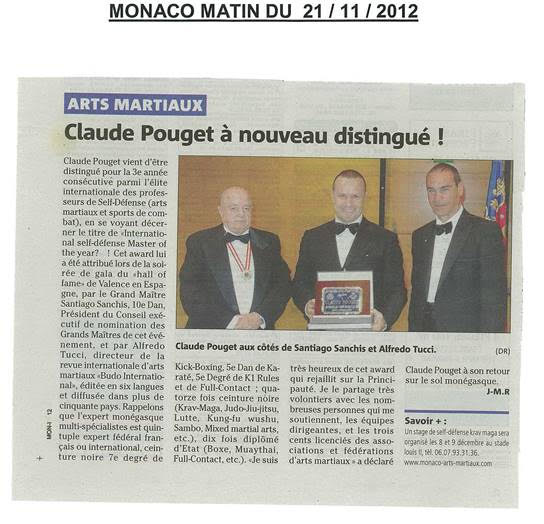 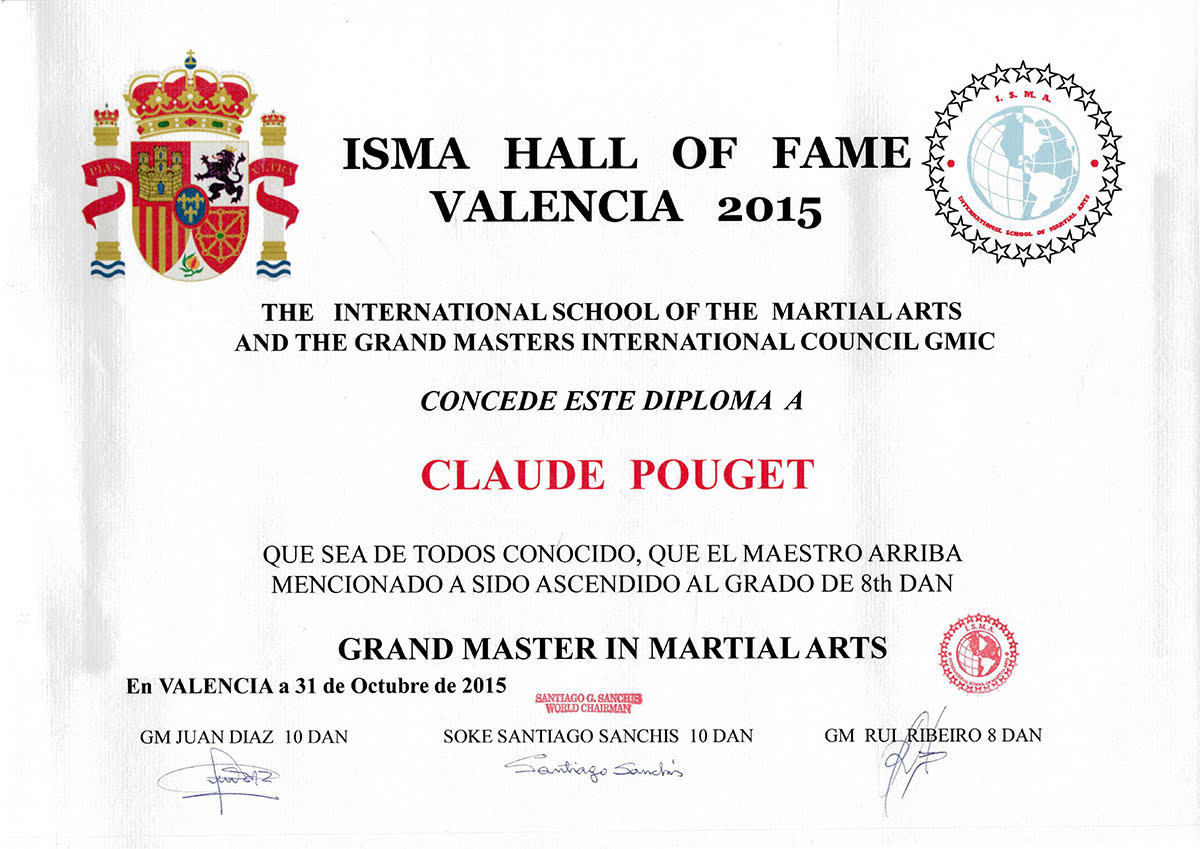 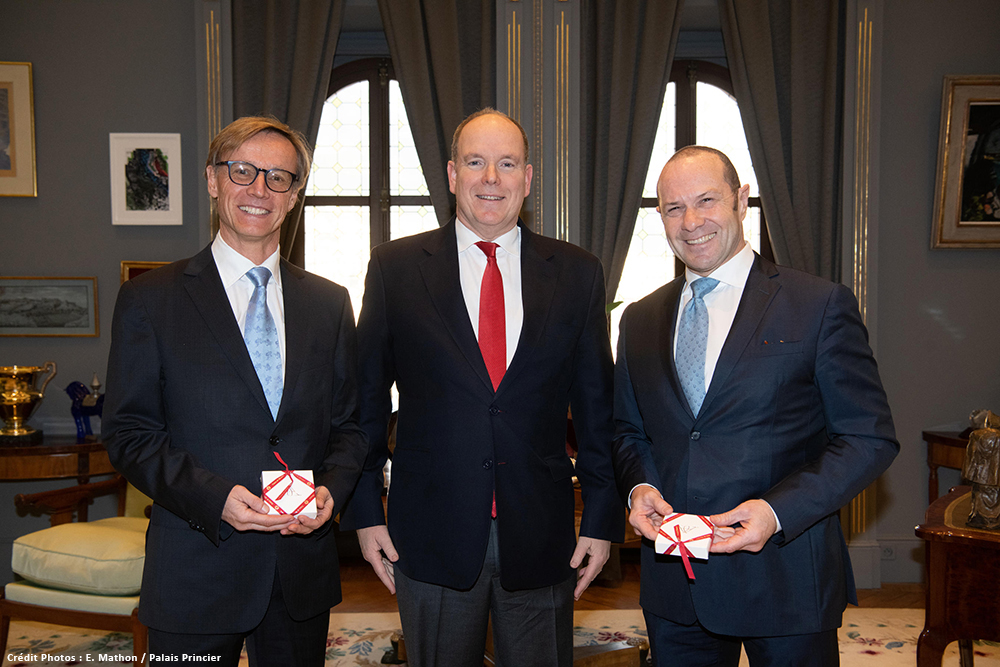 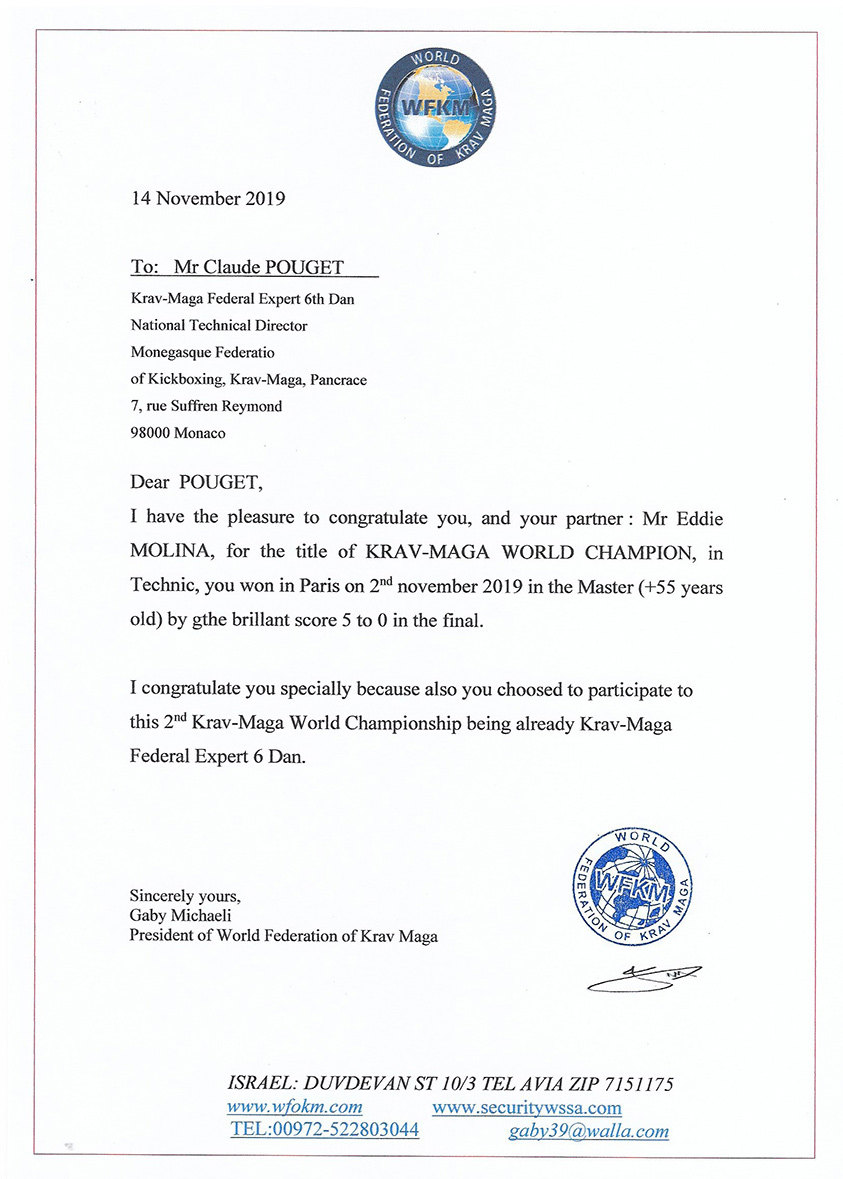 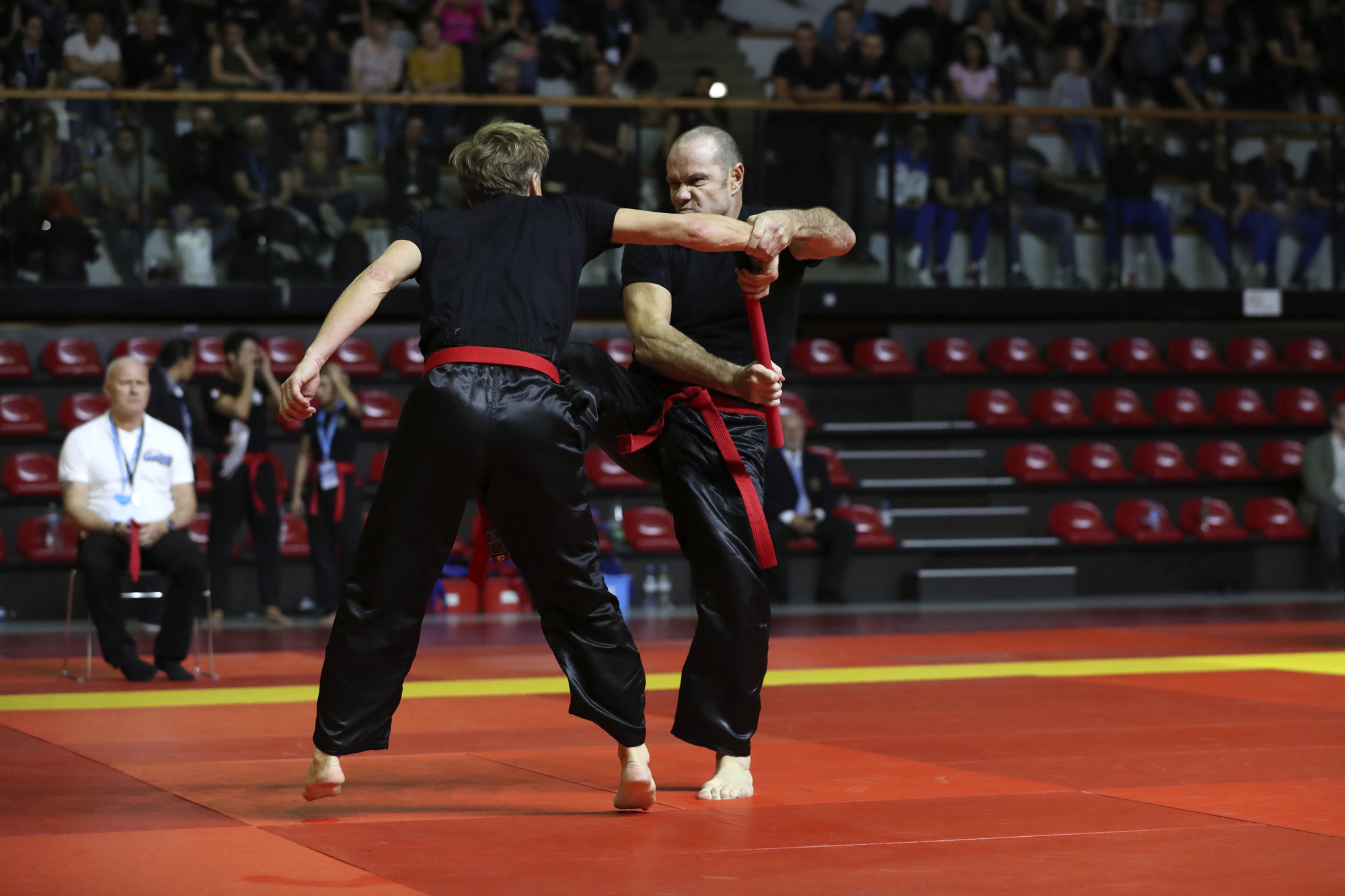 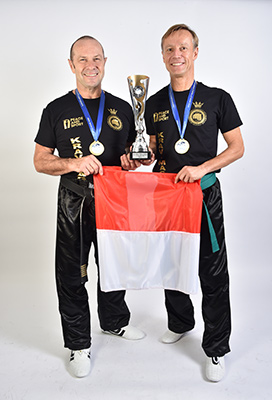 He has been selected for the "France Shotokan" national Karate team (1984), ranked vice-champion in the 1st World International Karate Shotokan Tournament in Paris 1984, Selected for the French Sambo team (1996), he came 4th at the 1996 Sambo world championship in Madrid (Spain), Champion of France individual fighting Karate (military) 1984, , .

Claude POUGET obtained the first of his ten State certified diplomas in martial arts teaching at the age of 23 (1984) in Karate (B.E.1), followed by the DEJEPS and Higher State Certificate (B.E.2) in Karate and Associated Disciplines (Krav Maga, Wushu, Pencak Silat).

He also gained State certified diplomas (BE or BPJEPS) in English Boxing, Sambo, Wrestling, Kickboxing, Full Contact, Muay Thai and, in 2019, Contact Sports and Associated Disciplines, while being a Federal  Instructor in MMA, Brazilian Jiu-Jitsu, Grappling, Tonfa and Telescopic Baton and and Federal Grappling Teacher. 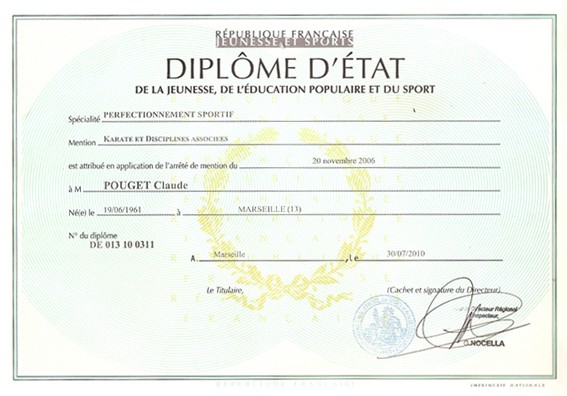 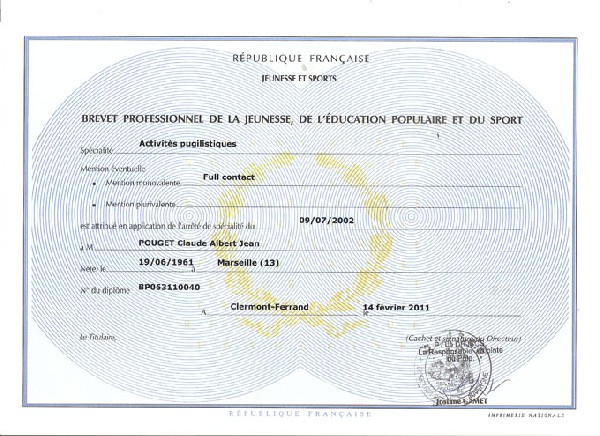 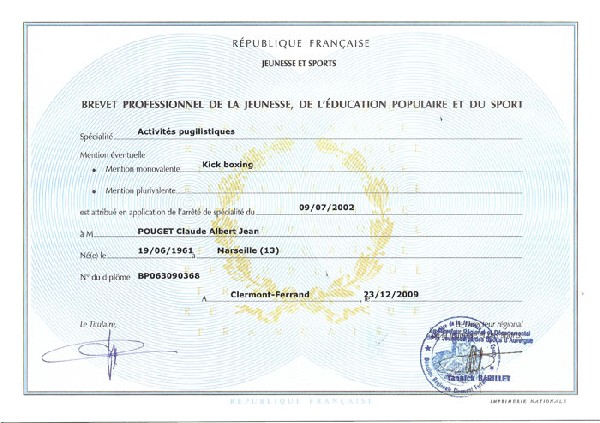 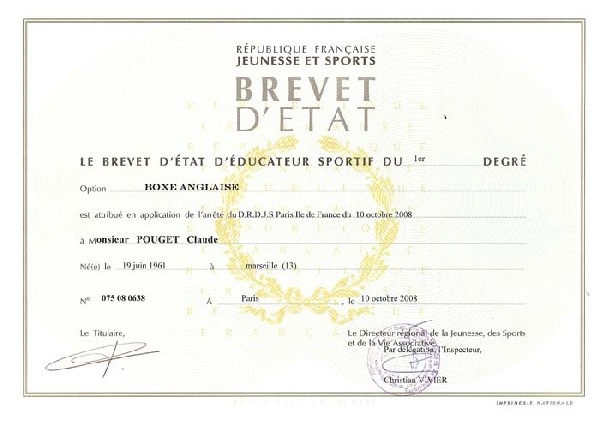 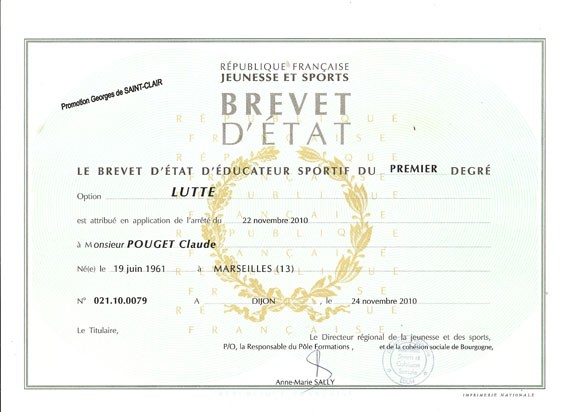 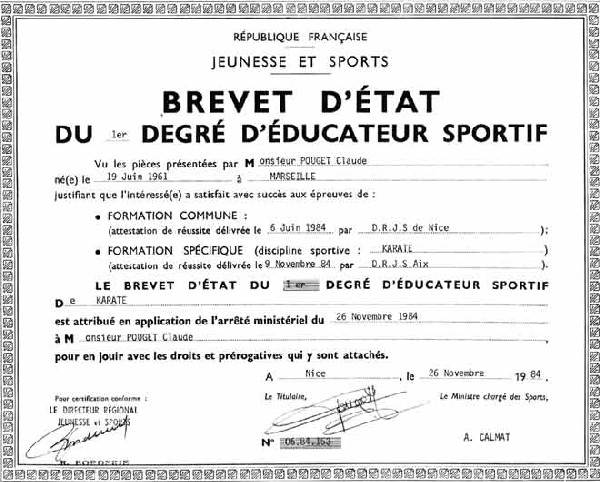 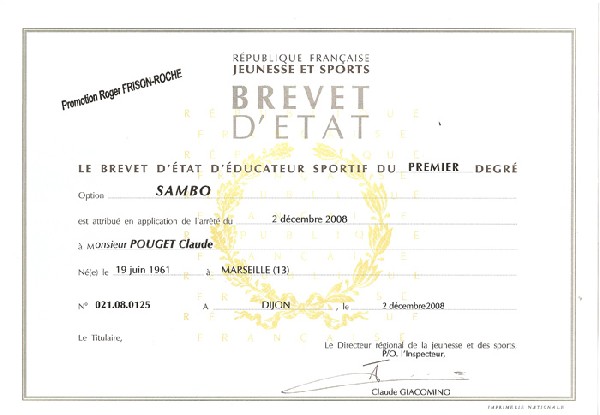 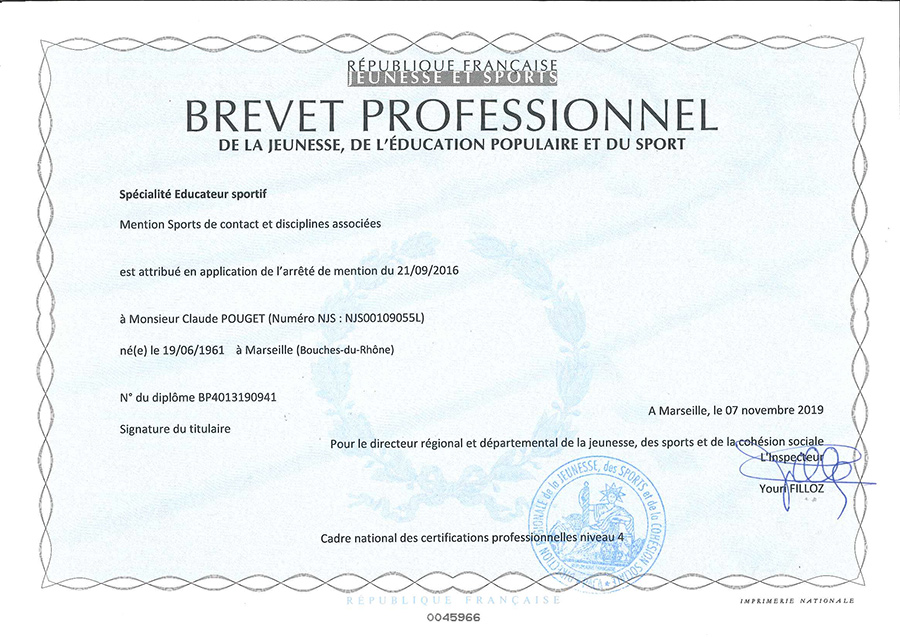 Holder of six Expert titles in martial arts and fighting

Holder of fifteen black belts in martial arts and fighting

Claude Pouget is founding President and Chief Technical Director of three Monegasque Federations in: Kickboxing, Krav Maga and Pankration; Wushu; and Muay Thai and Associated Disciplines (Pencak Silat, Kyusho, Kali Eskrima). These federations are all approved (equivalent of the Ministerial Delegation in France) by the Prince's Government and recognised by the Monegasque Olympic Committee and affiliated to the respective International Federations (W.A.K.O., I.W.U.F., I.F.M.A.), themselves recognised by the International Olympic Committee.

In Krav Maga, Claude Pouget was trained abroad, notably in Israel, and is an international and national expert, executive in France and Monaco.

Claude Pouget has been practicing Krav Maga since 1999 (twenty years ago, when already an expert in martial arts) internationally (France, Israel, Europe, United States of America), and from different angles. He earned several instructor certifications, including Israeli ones.

-Internationally, within the World Federation of Krav-Maga, in Israel : a member of the Steering Committee and Technical Committee ;

-In France, in the French Karate and Associated Disciplines Federation (FFK), delegate for Krav Maga : a Federal expert in Krav Maga, 6th Dan, as well as Member of the Krav Maga National Commissions and Grades. He is also a member of the Jury at Krav Maga grade examinations, for: 1st, 2nd, 3rd, 4th ,5th Dan and Head of Krav Maga grades in Provence Alpes Côte d’Azur Regional League and the Alpes Maritimes Departmental Committee.

In Monaco, within the Monegasque Krav Maga Federation ( including Kickboxing and Pankracium -FMKP see above), approved by the Prince’s Government and recognised by the Monegasque Olympic Committee :  Founding President (2001) and National Technical Director.

Claude Pouget is an experienced teacher, multi-state graduate, all audiences

He also teaches Martial Arts since over 40 years, with 15 state degrees, in the International Martial Arts Academy of Monaco, Cap d'Ail (06), and in the Krav Maga Academy in Beausoleil (06).

In Monaco, his collective teaching, with his team, is mainly involved with Krav Maga, Kickboxing and Muay Thai, and Pankration at the Louis II Stadium (Boxing Hall), specifically aimed at the following people: children, (from age 5), teenagers, adults, going from a few, to a total of 350 practitioners (children, teenagers, adults and seniors) in his area.

As an instructor for security personnel, Claude POUGET, he is also active in schools in Monaco. The Academy of Martial Arts (see above), which he co-directs, is also a partner of Monaco's National Youth and Sports Education Department, as part of the excellent extra-curricular "Pass'Sport Culture" programme to which it contributes martial arts courses.

at the Kickboxing, Muaythai and Krav-maga International Academy of Monaco

We use cookies on our website. Some of them are essential for the operation of the site, while others help us to improve this site and the user experience (tracking cookies). You can decide for yourself whether you want to allow cookies or not. Please note that if you reject them, you may not be able to use all the functionalities of the site.